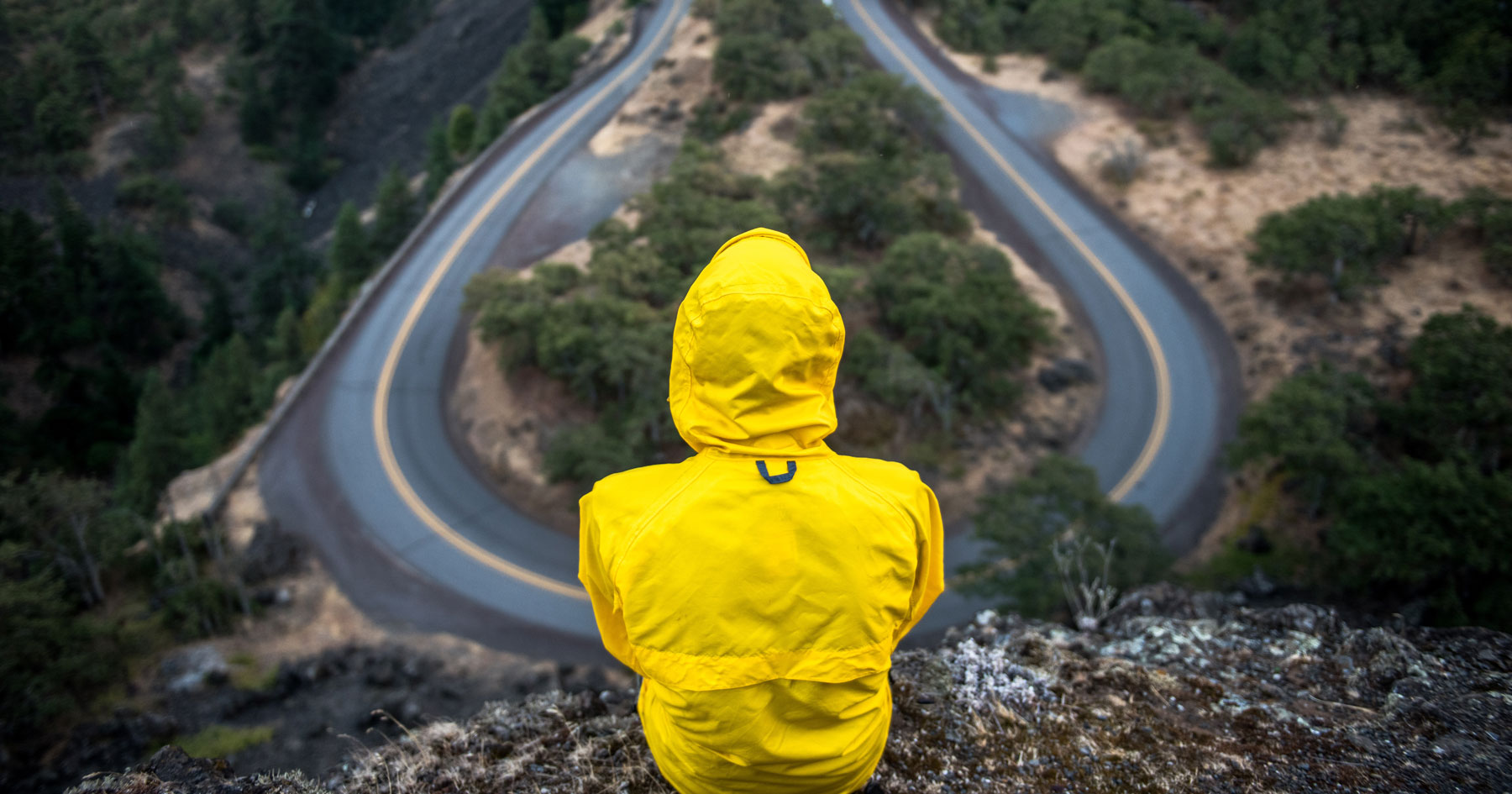 As I continue to figure out what this website will cover, I’ve created a fairly long list of things that I could potentially write about. A lot — maybe 70% — are what I’d call “hacks” or “pro tips” for business travelers. Little things that can make your day or life or plane ride a little bit better. A quick win or a blunting of an acute pain; stuff like advice on the best things to wear when you fly (compression socks) or a long digression on the best water bottle for air travel (you would think it’s a collapsible water bottle, but it’s not, because collapsible water bottles suck).

I’d call them hacks when I’m feeling generous. When I’m in a darker mood, I’d call them distractions. Bullshit.

One of my favorite talks is Merlin Mann’s largely improvised version of his talk about time and attention, “Who Moved My Brain?”

I like it better than the slides-and-script version because when forced to do it from memory, he tips his hand a little bit — you can tell which parts he’s really obsessed with by looking at what sticks in his mind when he doesn’t have his materials.

Anyway, the improvised version has a very to-the-point preamble that doesn’t really show up anywhere else I’ve seen a recording or transcript of the talk.

I don’t know if this is just my own particular mania or misfortune or or mental affliction, but the more time I spend thinking about this stuff, the less interested I am in the relatively superficial problems of things like email.

But the funny part is, since I’ve been doing this stuff and had the luxury of time to think about it — and to be dead honest, to have the experience that I’m having right now, of meeting people who have real jobs — the clearer it becomes to me that those superficial parts, those superficial challenges, while not being untrue or unreal, are truly kind of just the top layer of the problem.

When we find the interest…courage…inclination…scope to dig just a little bit further, things get way more interesting really really quickly.

That’s the funniest part of all of this — the thing that you noticed, the problem that you noticed, a problem that is very real, like email, like meetings (let’s be honest), those things that were the itch that you wanted to scratch? It doesn’t take long scratching to realize there’s a whole lot more than meetings and email going on behind that problem.

We end up getting interested in solving the problems that we understand, and having the kinds of fear and uncertainty and anxiety that we’re used to having.
And I started to realize a part of my interest in talking to people like you is to figure out how to get you interested in being scared of more fascinating things.

I feel like, I don’t know, an oncologist or a physician and I feel like periodically I get this stream full people who are almost dead from a brain tumor the size of a volleyball, and they mainly want me to find out where they can get bigger hats.

And with all of my might, I try to say them “you know, you’ve got a bigger problem than hats right now. And while I would be happy to you know point you to a local haberdashery, I’d really rather help you get rid of the tumor.”

(slightly edited for flow; emphasis mine)

Merlin Mann, Who moved my brain?

So yeah, that. Tumors, not hats.

Chasing hacks implies a reluctance to move past the first superficial problem, the belief that finding the right hat is going to solve the problem of the tumor. Hacks offer an easy solution to a difficult problem. They feel good, so they must be true.

It’s tempting to think this way.

This is true for a select few things, but I think for most things, it’s a comforting lie — most hard things are just hard. Simple, but hard.

Recognizing this as a fallacy doesn’t doesn’t stop us, though. We still love (or at least, I still love) collecting tips and tricks, little ways to cheat boring-but-important problems that have boring-but-simple solutions.

Getting past the surface

In the book-length treatment (The Road Warrior, coming out this spring), I can properly contextualize tactical tips. I can frame them up in service of the “more important” concepts (although I still can’t make people understand, or care).

In a 700-word blog post, I don’t have that luxury. “Go for a run in a new city! You can exercise and explore at the same time!” True. Helpful. Banal.

The question being answered is “how do I get myself to exercise more?” and “do it while you’re doing something that you actually enjoy” is a great solution to that, but it’s a sort of simplistic one. Even if I get into the underlying cognitive trickery that makes this work — temptation bundling — and how Netflix + iPad + hotel gym treadmill scratches the same itch, that’s at least an interesting article, but it’s still just the surface of the solution.

But what if I tried to answer the question by instead answering the deeper questions? Questions like “how much exercise do you really need to do, anyway? or “how do I fall in love with exercise?” or “why can’t I prioritize my well-being?” or, more simply, “how do I change my behavior? And how do I do it without bullying myself into it every step of the way?”

At the very least, I prefer writing about those things. They’re probably more valuable to you in the long run, too.

But also, they’re not necessarily what you, dear reader, are looking for. You’re arguably here because you want a solution to the problems you asked about. Because you’re busy, and tired, and want fast solutions to the hard problems of an inherently difficult lifestyle (or because you’re my dad — hi dad).

I fully intend to continue to write about a variety of little hacks and tips and experiments for making the most of your time, taking care of your body, and all of the other troubling parts of being on the road.

Because really, that’s what I want to talk about about: the understanding that you’re not powerless, no matter what situation you’re in; the fact that you don’t have to trade your identity or your wellbeing for success; and the idea that being careful and intentional with your behavior is really the only skill you need (well, that and a few healthy dashes of critical thinking and self-experimentation).

But if I just start talking about that stuff, you (probably) won’t listen. It doesn’t matter to you yet, because it seems like a distraction from the Very Obvious And Immediate problem you came here to solve.

So, where’s the balance? Where do we start? How do I encourage you to care about the process of adopting a durable, sustainable exercise routine, as opposed to tricking yourself into exercising until you get bored of the trick? How do I get you to care about the nuanced difference between “best, objectively” and “best, because you’ll do it?”

The answer is lead bullets.

These are both lead bullet problems.

As venture capitalist Ben Horowitz says, there is exactly one problem in the world that has a silver bullet solution: werewolves. Unless you’re trying to kill werewolves, you have a problem that there exist no silver bullets for.

And while careful, well-directed shots can do a lot more than a “spray and pray” approach, the message still holds: to guarantee success with lead bullets, you have to shoot a lot of them.

There’s no way around these problems being hard. No hacks. No silver bullets. The only solution is brute-forcing it. Ideally not white-knuckle death-march misery, but diligent, sustained, forceful effort all the same.

To that point, this is the real value I see in “hacks”: they’re often pitched as silver bullets, but they’re really just lead ones. They’re the ammunition you need to begin taking on a big, wild challenge that seems as intractable as an enemy army marching on your position. To make it seem doable.

And so, I’ll keep writing the hacks. But I’ll also be writing weird, navel-gazy meta-whatevers like this, and big dissertations on habit change and nutrition myths and behavioral psychology, and probably other stuff too. I’ll try and teach you about venous return at the same time I tell you to buy compression pants.

Because those are lead bullets too, just aimed a little more carefully.

The best approach is many approaches, applied diligently over time. Taking many small steps forward, until you suddenly realize the problem is in the rearview.

I’m not saying that this needs to be a slog, or miserable, despite the whole bullet metaphor. But I am saying that it requires a thing that is constantly overlooked in our contemporary environment of “hacks” and scattered attention and outsized promises from the health, fitness, and entrepreneurship content machines: diligent, repeated effort.

There are other names for this idea. In the context of creative craft, Frank Chimero lovingly calls it “The Long, Hard, Stupid Way.” In the context of building a business, Amy Hoy calls it “Stacking The Bricks.” The point is the same: over any reasonable time scale, diligent, repeated effort beats every “do it fast” trick ever invented.

It’s not, and everyone promising you overnight success is lying, or trying to sell you something.

As I solve more problems in my own life, I think more and more that this kind of effort might be the only way to get anything worth having. The only way to make progress is the long, hard, stupid way — I don’t know exactly what will work, so I have to keep slinging lead bullets in the right direction until I see improvement, and just as importantly, not give up until I do.

I would encourage you to do the same.