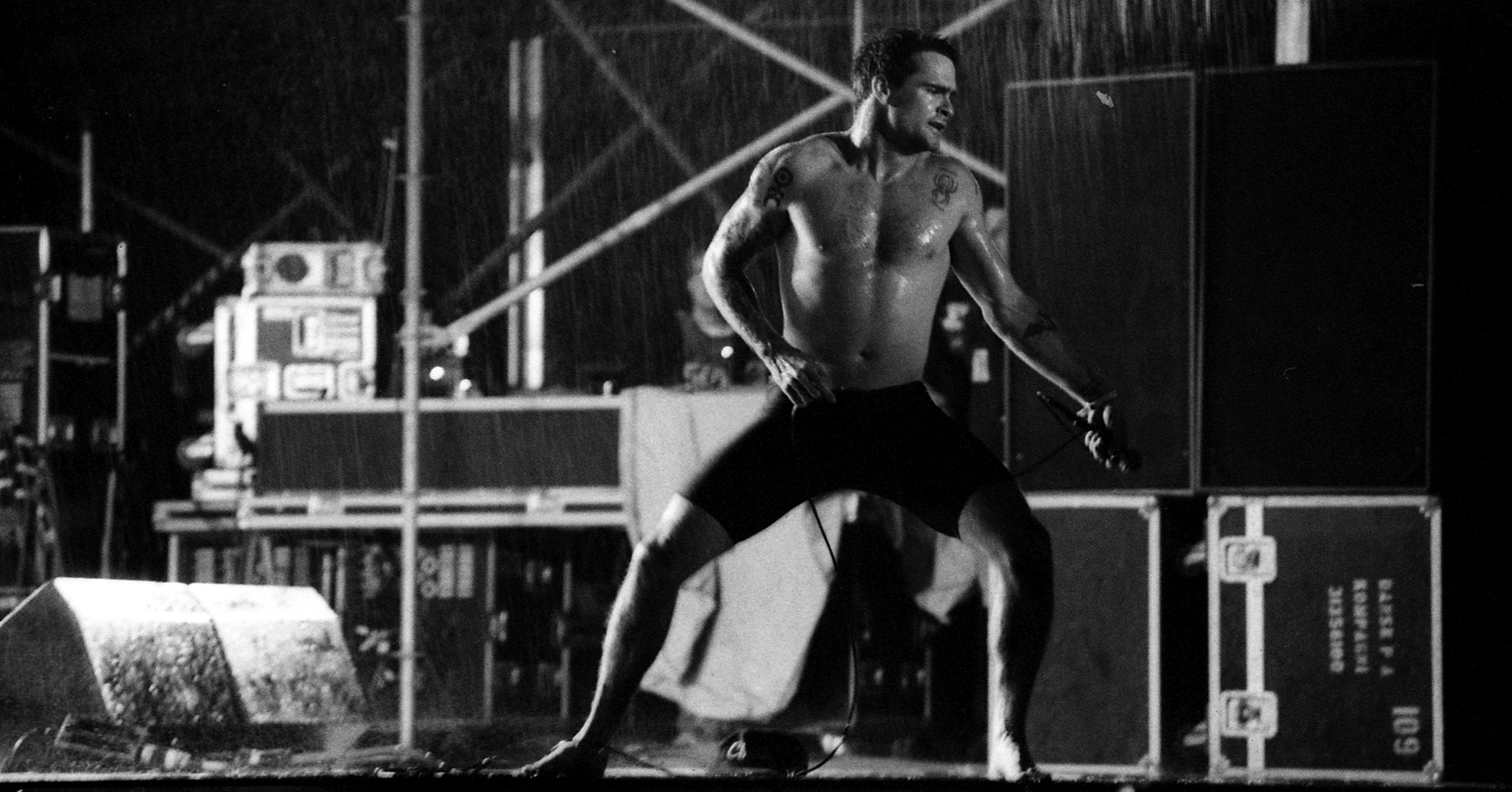 This essay by Henry Rollins first appeared in in 1994 the now-defunct Details Magazine. Henry Rollins’ words have been incredibly important to Coleman and I over the years,1To each other, we just refer to him as “Uncle Hank” and these words in particular made a tremendous impact on us as a couple of nerdy teenagers. We’ve decided to host a copy here as there is no longer an official version online.

The Iron and The Soul, by Henry Rollins

When I was young I had no sense of myself. All I was, was a product of all the fear and humiliation I suffered. Fear of my parents. The humiliation of teachers calling me “garbage can” and telling me I’d be mowing lawns for a living. And the very real terror of my fellow students. I was threatened and beaten up for the color of my skin and my size. I was skinny and clumsy, and when others would tease me I didn’t run home crying, wondering why.

I knew all too well. I was there to be antagonized. In sports I was laughed at. A spaz. I was pretty good at boxing but only because the rage that filled my every waking moment made me wild and unpredictable. I fought with some strange fury. The other boys thought I was crazy.

I hated myself all the time.

As stupid at it seems now, I wanted to talk like them, dress like them, carry myself with the ease of knowing that I wasn’t going to get pounded in the hallway between classes. Years passed and I learned to keep it all inside. I only talked to a few boys in my grade. Other losers. Some of them are to this day the greatest people I have ever known. Hang out with a guy who has had his head flushed down a toilet a few times, treat him with respect, and you’ll find a faithful friend forever. But even with friends, school sucked. Teachers gave me hard time.

I didn’t think much of them either.

Then came Mr. Pepperman, my advisor. He was a powerfully built Vietnam veteran, and he was scary. No one ever talked out of turn in his class. Once one kid did and Mr. P. lifted him off the ground and pinned him to the black board. Mr. P. could see that I was in bad shape, and one Friday in October he asked me if I had ever worked out with weights. I told him no.

He told me that I was going to take some
of the money that I had saved and buy a hundred pound set of weights at Sears. As I left his office, I started to think of things I would say to him on Monday when he asked about the weights that I was not going to buy. Still, it made me feel special. My father never really got that close to caring. On Saturday I bought the weights, but I couldn’t even drag them to my mom’s car. An attendant laughed at me as he put them on a dolly.

Monday came and I was called into Mr. P.’s office after school. He said that he was going to show me how to work out. He was going to put me on a program and start hitting me in the solar plexus in the hallway when I wasn’t looking. When I could take the punch we would know that we were getting somewhere. At no time
was I to look at myself in the mirror or tell anyone at school what I was doing. In the gym he showed me ten basic exercises. I paid more attention than I ever did in any of my classes. I didn’t want to blow it. I went home that night and started right in.

Weeks passed, and every once in a while Mr. P. would give me a shot and drop me in the hallway, sending my books flying. The other students didn’t know what to think. More weeks passed, and I was steadily adding new weights to the bar. I could sense the power inside my body growing. I could feel it.

Right before Christmas break I was walking to class, and from out of nowhere Mr. Pepperman appeared and gave me a shot in the chest. I laughed and kept going. He said I could look at myself now. I got home and ran to the bathroom and pulled off my shirt. I saw a body, not just the shell that housed my stomach and my heart. My biceps bulged. My chest had definition. I felt strong. It was the first time I can remember having a sense of myself. I had done something and no one could ever take it away.

You couldn’t say s–t to me.

It took me years to fully appreciate the value of the lessons I have learned from the Iron. I used to think that it was my adversary, that I was trying to lift that which does not want to be lifted. I was wrong. When the Iron doesn’t want to come off the mat, it’s the kindest thing it can do for you. If it flew up and went through the ceiling, it wouldn’t teach you anything. That’s the way the Iron talks to you. It tells you that the material you work with is that which you will come to resemble.

It wasn’t until my late twenties that I learned that by working out I had given myself a great gift. I learned that nothing good comes without work and a certain amount of pain. When I finish a set that leaves me shaking, I know more about myself. When something gets bad, I know it can’t be as bad as that workout.

I used to fight the pain, but recently this became clear to me: pain is not my enemy; it is my call to greatness. But when dealing with the Iron, one must be careful to interpret the pain correctly. Most injuries involving the Iron come from ego. I once spent a few weeks lifting weight that my body wasn’t ready for and spent a few months not picking up anything heavier than a fork. Try to lift what you’re not prepared to and the Iron will teach you a little lesson in restraint and self-control.

I have never met a truly strong person who didn’t have self-respect. I think a lot of inwardly and outwardly directed contempt passes itself off as self-respect: the idea of raising yourself by stepping on someone’s shoulders instead of doing it yourself. When I see guys working out for cosmetic reasons, I see vanity exposing them in the worst way, as cartoon characters, billboards for imbalance and insecurity. Strength reveals itself through character. It is the difference between bouncers who get off strong-arming people and Mr. Pepperman.

Muscle mass does not always equal strength. Strength is kindness and sensitivity. Strength is understanding that your power is both physical and emotional. That it comes from the body and the mind. And the heart.

Yukio Mishima said that he could not entertain the idea of romance if he was not strong. Romance is such a strong and overwhelming passion, a weakened body cannot sustain it for long. I have some of my most romantic thoughts when I am with the Iron. Once I was in love with a woman. I thought about her the most when the pain from a workout was racing through my body.

Everything in me wanted her. So much so that sex was only a fraction of my total desire. It was the single most intense love I have ever felt, but she lived far away and I didn’t see her very often. Working out was a healthy way of dealing with the loneliness. To this day, when I work out I usually listen to ballads.

I prefer to work out alone.

It enables me to concentrate on the lessons that the Iron has for me. Learning about what you’re made of is always time well spent, and I have found no better teacher. The Iron had taught me
how to live. Life is capable of driving you out of your mind. The way it all comes down these days, it’s some kind of miracle if you’re not insane. People have become separated from their bodies. They are no longer whole.

I see them move from their offices to their cars and on to their suburban homes. They stress out constantly, they lose sleep, they eat badly. And they behave badly. Their egos run wild; they become motivated by that which will eventually give them a massive stroke. They need the Iron Mind.

Through the years, I have combined meditation, action, and the Iron into a single strength. I believe that when the body is strong, the mind thinks strong thoughts. Time spent away from the Iron makes my mind degenerate. I wallow in a thick depression. My body shuts down my mind.

The Iron is the best antidepressant I have ever found. There is no better way to fight weakness than with strength. Once the mind and body have been awakened to their true potential, it’s impossible to turn back.

The Iron never lies to you. You can walk outside and listen to all kinds of talk, get told that you’re a god or a total bastard. The Iron will always kick you the real deal. The Iron is the great reference point, the all-knowing perspective giver. Always there like a beacon in the pitch black. I have found the Iron to be my greatest friend. It never freaks out on me, never runs. Friends may come and go. But two hundred pounds is always two hundred pounds.