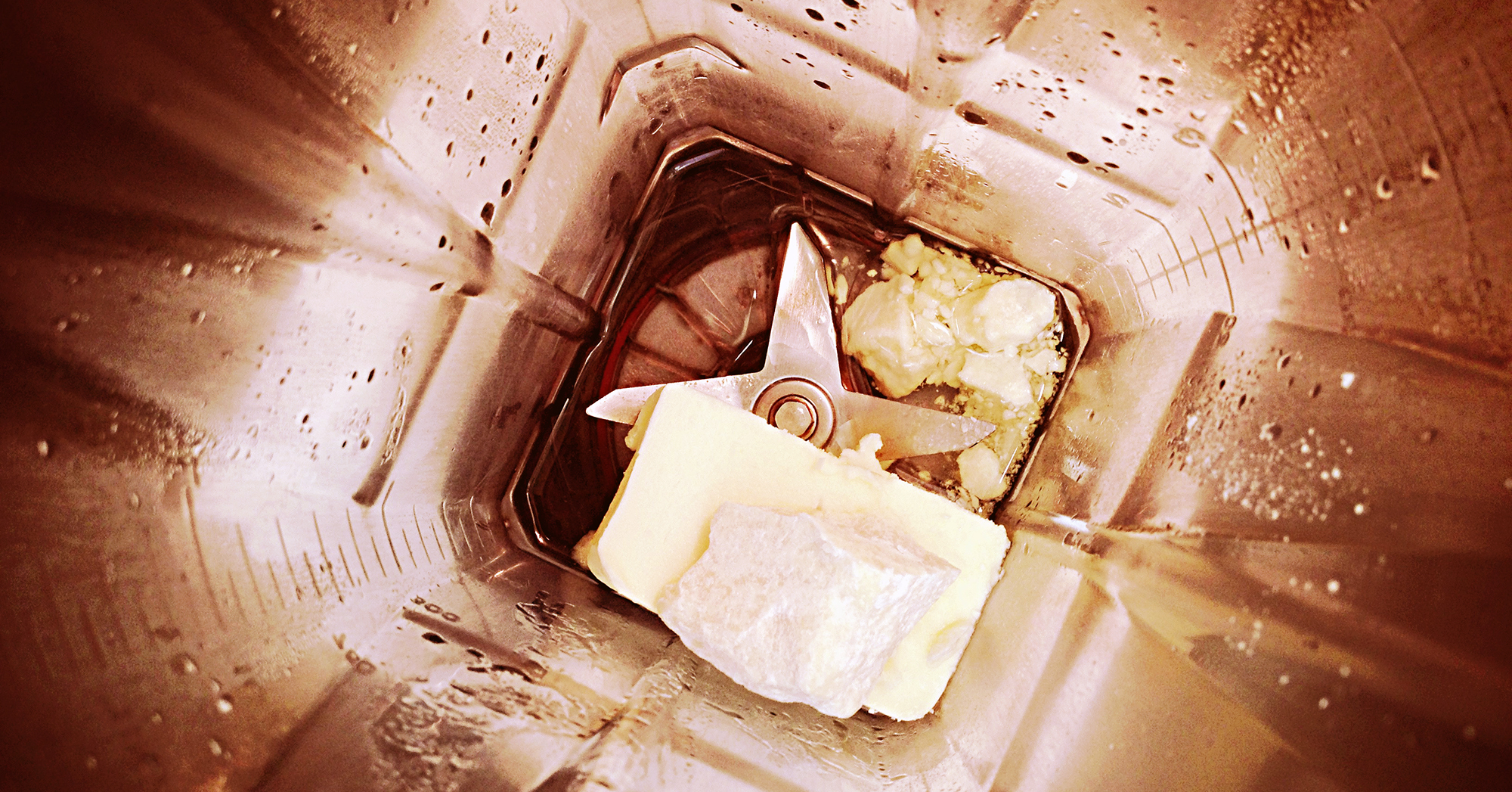 “If you see fraud and do not say fraud, you are a fraud.” – Nassim Nicholas Taleb

I was at my local grocery store on Wednesday when I saw something I hadn’t seen before: ready-to-drink Bulletproof® Coffee. If you’re unfamiliar, Bulletproof® Coffee is where you add butter and coconut oil to coffee and blend until smooth, creating a high-fat calorie bomb that is allegedly very good for you. Allegedly.

It’s been available as a DIY kit and at various cafes for a few years, and has racked up an impressive amount of hype in that time. It’s also racked up an impressive amount of questionable health claims in that same time — mostly coming from Bulletproof® founder Dave Asprey saying that it “has a massive impact on your energy and cognitive function” and that it “puts your brain on full blast without weighing you down.” But only if that butter is grass-fed, the coconut oil is refined into Brain Octane® Oil, and the coffee is Bulletproof® Certified Clean coffee, all of which you can buy (separately or pre-blended) from Bulletproof.com.

The claims of energy and cognitive function aren’t outrageous. Coffee makes you alert and improves cognitive function. Consuming nearly 500 calories of anything will give you energy. But they start to break down when you dig into the details — especially the outrageous claims about only using Bulletproof® products to make the stuff. We’re going to go deep into the science here; if you just want the summary and my conclusions and opinions, feel free to skip ahead to the “science doesn’t make general claims” section.

My biggest problem with questionable health claims about Bulletproof® coffee is that Asprey and his company aren’t lying about any of this; they’re just misrepresenting the facts, not telling the whole truth, or making things up.

I’m honestly not sure if he’s actively misrepresenting the facts or actually believes the things he says; when I listen to Asprey himself on podcasts I get the impression that he’s actually a true believer instead of a snake-oil salesman. I’m willing to give him the benefit of the doubt and say that he’s a misguided guy who’s just trying to help people, but no matter what, the claims about Bulletproof® coffee are at best wrong and at worst actively harmful.

Let’s start with the coffee. Coffee is a stimulant; people have known this and consumed it in various forms for over 600 years. But Bulletproof® claims that most coffee is full of mold-based mycotoxins that make it taste bitter, sap you of energy, and make your brain slower. (Unsurprisingly, they’re willing to sell you “Certified Clean” beans that are certified mycotoxin-free.)

This claim is technically true, but not the whole story.  We’ve known about mycotoxins in coffee for decades, and over 100 countries regulate levels of mycotoxins in food. Asprey quotes two studies when he claims that most coffee contains toxins — and he’s not wrong to do so. Those studies do conclusively show that between 50 and 90% of coffee contains some toxins. Key word: some.

The threshold of toxins those studies were looking for were .2 and .5 micrograms of toxin per kilogram of coffee, respectively, or .00000002% and .00000005% toxin by weight. Those levels are statistically significant but practically insignificant; more recent studies have determined that the presence of mycotoxins in coffee at this level of concentration “does not represent a potential risk for consumers”. Plus, those studies also mean that 10% to 50% of coffee is below that level by definition.

Also, if you’re still concerned about these trace, almost certainly not harmful mycotoxins in your coffee, you don’t need to buy “certified clean” beans. Just buy good coffee. The “certified clean” label only means two things: Bulletproof® representatives went to the farm where the coffee is manufactured and made sure their growing, harvesting, and processing processes were high quality, and they tested some small sample for “performance robbing toxins,” whatever those are.

You know who else does this? Most reputable third-wave coffee manufacturers (read: not Folgers), including some big names like Caribou, Kicking Horse, and Intelligentsia. Even Starbucks knows their farmers, sources ethically, and almost certainly lab tests their coffee, although they’ve never publicly stated this as far as I can find. As long as you’re buying even reasonably good whole bean coffee, you’ll be fine.

Without a doubt, consuming 200+ calories of caprylic acid (or any medium chain triglyceride) will give you energy. Unlike most fats, caprylic acid doesn’t have to be broken down before it can be converted into energy, meaning it can hit your brain right away — it’s the fat equivalent of a sugar rush. They’re also correct when they say that it’s metabolized into ketones.

Everything else is questionable at best.

Despite the name, there’s also no evidence that Brain Octane® Oil makes you think faster, and Bulletproof® doesn’t really try to provide any. In this article about medium chain triglycerides and Brain Octane®, the basic argument is that you can feel your brain turning on when you consume caprylic acid. But this isn’t news, or unique to caprylic acid — anything that is quickly metabolized (sugar, supplemental ketones, medium chain triglycerides) will feel like it gives you a big boost. It’s a fat rush instead of a sugar rush. That doesn’t make it good or bad, it’s just a statement of fact about how quickly you get the energy.

Bulletproof® provides no evidence that caprylic acid actually help with any of these well established measurements of brain function. They do link to one study that shows that medium chain triglycerides help cognition in alzheimer’s patients, but that doesn’t mean much for healthy people. Many, many essential vitamins and nutrients can be shown to help the sick and deficient dramatically, while having no effect on the healthy. (If you’re curious about that, I wrote more about how vitamins and supplements work here.)

The weight loss claims have the same basic issues as the claims of appetite suppression. They’re based on studies about blood ketone levels, not supplemental medium chain triglycerides, meaning they (almost certainly) conflate cause and effect in the same way. It’s the same bad science — ketones end up in the blood as the result of burning fat, whether it’s coming from your love handles or your coffee. The idea that ketosis specifically causes weight loss is factually untrue.

Your body quickly burns caprylic acid and other MCTs because they go through a different metabolic pathway than most other fats, but they still produce ketones. People on low-calorie diets are burning body fat for energy, so they also end up with high levels of ketones in the blood. Burning fat is the cause of ketones in the blood, not the result of it like Bulletproof®, Asprey, and many, many others claim.

The idea that Brain Octane® Oil helps you work out harder is also ridiculous. First off: harder than what? If you dig into the claims, it seems like the answer to that is “harder than when you eat carbs.” That claim comes from a study that showed that blood sugar spikes decreased testosterone — but there are still about four big cognitive leaps between “large amounts of refined carbs decrease testosterone” and “caprylic acid and other MCTs help.” Yet again, these claims are based on overgeneralizing the conclusions well past what the original studies say.

The butter is ok

It’s not clear that you should consume 200-400 calories of butter for breakfast — you could get all of the same nutritional value with a scant 50 calories of sardines, and extremely high fat diets may cause gallstones and be toxic to your liver — but it’s totally possible for this habit to be a part of a healthy diet, and if you’re going to eat a bunch of butter first thing in the morning, it’s probably best for it to come from nutrient-dense grass-fed butter instead of the conventionally farmed stuff.

Grass-fed dairy products are decidedly higher in vitamins and essential free fatty acids (including omega-3s, which most people are deficient in).

This is the larger issue at play here, and to get into it, we need to talk science for a moment, because “the science” and specific cherry-picked studies associated with “the science” is what Bulletproof hangs their claims on.

One of the core tenets of good science is that it doesn’t make claims beyond what a study showed conclusively. To claim that Bulletproof® coffee gives you energy, helps suppress hunger, makes you think faster, helps you lose weight, and helps you workout harder, you need studies that show that caprylic acid, butter, and coffee blended together specifically do those things. Not studies that show that a downstream result of taking them does, not claims by analogy, not claims by the transitive property, not claims of “try it, you’ll feel it!”.

Bulletproof® is rife with weak, extrapolated, generalized claims like this. For example, the Bulletproof® Diet bans beans because raw beans contain various lectins, a kind of protein that can cause health issues. Unfortunately, there’s no evidence that cooked beans cause any health issues, probably because lectins are destroyed by cooking and/or soaking, something that ancestral humans figured out almost 10,000 years ago.

I could go on, but I think you get the point.

To be clear, I actually encourage this extrapolation-from-the-science as interesting jumping off points for both lab experiments and self-experimentation. I’ve personally done the same with many ideas (mostly in the strength and conditioning space, not the nutritional space, but still), and I know that’s what Asprey does himself.

Most of the people who he’s helped, he helps this way: they try something interesting that he suggests, and it works for them. Perhaps they don’t tolerate beans well for other reasons; perhaps intermittent fasting with lots of fat is not metabolic magic, but is a behavioral pattern that works well for them.

But claiming that these ideas work for everyone, with misleading links to semi-related studies and a store full of supplements and overpriced coffee set to capitalize off that bad science, is simply not ok. The only time Bulletproof® seems willing to make cautious “this could work, proceed carefully” recommendations is when they’re suggesting readers take banned performance enhancing drugs that might make those readers go blind. I would appreciate the same level of candor in other articles as well.

Like I said at the beginning of this article, I’m not sure if Bulletproof® is actively misleading people, actually believes the nonsense they spout, or if they just don’t care. It doesn’t matter, ultimately. They shouldn’t be doing what they do.

I believe that as people who give advice about health and productivity, we have a responsibility to be clear about the kind of advice that we’re giving. Coleman and I promise to clearly distinguish between things that have worked well for us in the past and things that have been proven by science to work well for everyone.

You should try both kinds of things, probably, but with very different approaches and with very different expectations. I wrote more about this in that vitamin/supplement article, but suffice it to say: you should do things that are scientifically proven to work, but keep in mind that those things are actually few and far between. The rest you should try with caution, and a careful eye on yourself, especially if there is a chance they could harm you.

We actually don’t know a lot of things. Acknowledging that isn’t a weakness or antithetical to good marketing. It’s what lets us learn.

That said, I’ll leave you with one certainty: when someone is trying to convince you that you have a problem, and they also happen to be the only person who sells the answer to that problem, the best course of action is always to run like hell.